It is surprising to me that an American President would cater to the Muslim Brotherhood as Barack Hussein Obama does. Let’s just cover a few points, shall we?

Obama injected himself directly into the Arab spring under the guise of helping to spread Democracy.

Obama has constantly apologized to the Muslims for American policies. 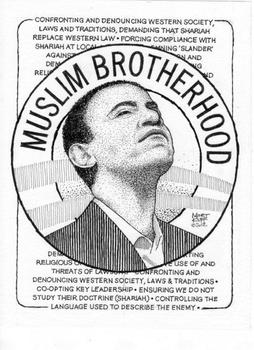 Obama has encouraged immigration to the US from the Gaza strip, most of whom are Hamas sympathizers.

Obama continues to funnel billions of dollars of American taxpayer money into the Middle East and has given American arms to those who seek to destroy us.

Obama was too busy campaigning while our Middle East embassies were being over run by jihadists.

The ambassador to Libya, Christopher Stevens was sodomized and murdered.

American flags were removed and burned  at our embassies and replaced with al-Qaeda flags.

Obama has dismantled NASA’s space program and turned it into a Muslim outreach center.

Obama and his regime have appointed Muslims to top level security positions in our government. An example of this is Hillary Clinton’s chief of staff, Huma Abedin.

Army officer Nidel Hassan, a known Muslim jihadist, turned his weapon on American troops at Fort Hood and Obama and his regime deemed it as “workplace violence.”

Obama’s top advisor and closest friend is Valarie Jarret,who was Iranian-born and never had to undergo a vetting by the US Congress.

Obama, by his own admission, is a Muslim and says that the Muslim call to prayer “is the greatest sound on earth”.

Obama fails to have any communication with Israel concerning the fact that Iran is soon to have nuclear weapons and has threatened to wipe Israel off of the map.

From what I can see here, these are not the actions of a pro-American, pro-Isreali President. We were warned months ago by an article published in the Canada Free Press that the U.S. has been infiltrated by the Muslim Brotherhood at the highest levels. Based on what we have all seen through the past four years of this regime, is it possible that Barack Hussein Obama is also part of and working for the Muslim Brotherhood? The facts would appear to support this theory.

As always, America, stay safe and be aware of your surroundings.