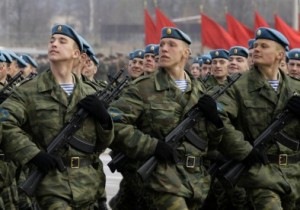 Russian army paratroopers were in Colorado for two weeks of training with the 10th Special Forces Group at Fort Carson, a post outside Colorado Springs.

The two nations’ militaries have been conducting joint exercises for years, but this is believed to be the first time Russian soldiers have trained on U.S. soil, Lt. Col. Steven Osterholzer said.

Some people have seen sinister motives behind the appearance of troops from America’s longtime Cold War enemy at a U.S. Army post, he said.

The training is the result of a U.S.-Russian agreement signed a year ago. The objectives are to create a basic relationship between the two nations’ militaries and to build an understanding about how each other’s military works, including communications, Osterholzer said.