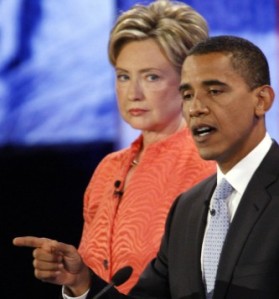 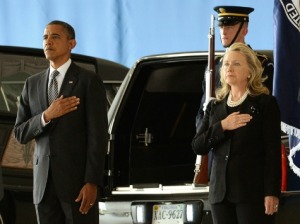 A nasty rift has opened up between President Barack Obama, former President Bill Clinton, and Secretary of State Hillary Clinton over the fallout from the terrorist attacks on the U.S. consulate in Libya that killed Ambassador Chris Stevens. This feud may undermine and threaten Obama’s reelection chances.

Obama and Clinton both do not want to be held responsible for the negligence before and the cover-up after the Libya attacks. Clinton biographer Ed Klein on Friday reported that Bill Clinton, sensing Obama’s political team wants to pin legal and political blame on the State Department and Hillary Clinton, has been working on doomsday and contingency scenarios “to avoid having Benghazi become a stain on her political fortunes should she decide to run for president in 2016.”

“If relations between Obama’s White House and Hillary’s State Department rupture publicly over the growing Benghazi scandal, that could damage the Democratic ticket and dim Obama’s chances for re-election,” Klein writes.

According to Klein’s sources, Bill Clinton has assembled an informal legal team in case there are cables or other evidence that would legally implicate Hillary. Klein also told The Daily Caller that Bill has even considered advising Hillary to resign if the Obama administration tries to make her the “scapegoat.”

On Friday, there were signs the White House was preparing to do to throw Hillary Clinton and the State Department under the bus.

White House press secretary Jay Carney, when asked if Obama and Biden had “never been briefed” about the fact that more security was needed in Libya, essentially blamed the State Department, saying, “matters of security personnel are appropriately discussed and decided upon at the State Department by those responsible for it.”

Carney repeated a variation of this line throughout the press briefing.

Hillary Clinton went to a Center for Strategic and International Studies (CSIS) conference on the Middle East and North Africa Friday and tried to deflect blame from herself and the State Department — some damage control of her own.

She insisted the United States cannot guarantee “perfect security” for its diplomats overseas, though Stevens is the first ambassador to have been murdered overseas since 1979 under the Carter administration.

“We will never prevent every act of violence or terrorism, or achieve perfect security,” Clinton said. “Our people cannot live in bunkers and do their jobs.”

Clinton then claimed the reaction of the Middle East street “supports rather than discredits the promise of the Arab Spring.” Americans, she asserted, needed to look at the “full picture” and not just the “violent acts of a small number of extremists against the aspirations and actions of the region’s people and governments” that are in the headlines.

Clinton said Americans “cannot sacrifice accuracy to speed” in finding out the facts that led to the Libya attacks, and the Middle East cannot “return to the false choice between freedom and stability.”

Klein writes “the latest quarrel began when Clinton heard that Obama was behaving so cocky about his first debate against Mitt Romney that he wasn’t taking his debate prep seriously.”

Clinton offered to give Obama some advice, and Obama brushed him off.

Klein writes “the former president was dumbfounded that Obama had ignored his offer, and his hurt feelings quickly boiled over into anger.”

“Bill thought that he and Obama were on friendly terms after the convention,” a source told Klein. “He couldn’t believe that the White House didn’t even extend him the courtesy of a return phone call. He concluded that Obama’s arrogance knows no bounds.”

There is no love lost between Obama and the Clintons, and they could mutually destroy their political futures in the days ahead. Team Obama could destroy Hillary Clinton’s 2016 prospects by scapegoating her for the Libya attacks. But Hillary Clinton, by potentially resigning or pointing to evidence that implicates Obama and Biden, can just as easily torpedo Obama’s chances at getting reelected.