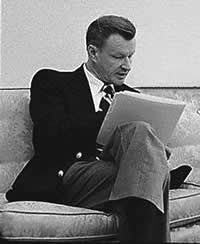 While attending Occidental University, 1979 – 81′, young Barack Obama meets a former Jimmy Carter administration official Zbigniew Brzezinski.  Brzezinski is a key CIA asset and expert on Russia.   He later becomes a mentor, and then much later a foreign policy advisor to President Elect Obama.

Obama is friends with three Pakistani college roommates, muslims, Mohammed Hasan Chandio, Wahid Hamid, and Indian Vinai Thummalapally.   In the summer of 1981 Obama travelled with his friends to Pakistan.

BEAR WITH ME – Obama goes to Pakistan in the summer of 1981 and then for some reason there is a gap in his historical references and timeline.  He does not reappear until the fall of 1982 attending Columbia (?) – or so the story is told, where he graduated in May of 1983.   (This timeline has always been a thorn in my psyche of reconciliation).

The trip to Pakistan was unexpectedly noted in an April 2008 fundraiser .  We wrote about it HERE.    Just two weeks before this speech and surprise announcement of his 1981 visit to Pakistan, employees of John Brennan  (who would become Obama’s terror chief) were caught tampering with Obama’s passport files. It should be noted  that “Obama’s top terrorism and intelligence adviser, John O. Brennan, heads a firm that was cited in March 2008 (just before this April fundraiser) for breaching sensitive files in the State Department’s passport office, according to a State Department Inspector General’s report released July 2009.  On April 19th the key figure Lt. Quarles Harris Jr., 24, who had been cooperating with a federal investigators, was found slumped dead inside a car.

However, against the backdrop of events at the time in 1981 Pakistan/Afghanistan, and

against the backdrop of both Brennan and Brzezinski being in the same area, at exactly the same time, things are adding up.

Again, consider Obama reportedly walked away from a full ride scholarship at Occidental the summer of 81′ never to return.  Instead he turns up, on paper only, at Columbia University the fall of 82′.   But no-one, I mean NO-ONE has ever noted him ever having attended there – Consider:

1) “Columbia University will not divulge whether the “alleged” diploma issued was in the name of Barry Soetoro or Barack Hussein Obama. No public record exists regarding the diploma.”

2) “Obama alleges he attended Columbia in 1982, 1983. But, the investigators have been UNABLE to turn up a single shred of written documentation for the years 1981, 1982, 1983, 1984 that show where Obama appeared on a school roster, register, faculty memo, bulletin board, school awards, dean’s list; where Obama’s name appeared in a yearbook, club record, fraternity record, extra curricular activity member roster, student newspaper, student radio or TV activity; where Obama appeared in any records as a worker, employee, laborer in or about Columbia University; where Obama enrolled in any sports activity or program.”

3) “As a graduating senior in 1983 he does not appear in any Political Science (his major) or Graduating Class yearbook or invitation records.”

4) “There is absolutely no documentation of any kind to show Obama attended, lived, worked or played at Columbia University during the investigated 4 years.”

5) “Interviewed professors, college employees, students (who were at Columbia during the years in question) have failed to turn up a single person that can remember Obama. This is irrefutable evidence. Think about your own situation if Obama had attended your college? A “now-famous” person went to your school? Many would be able to say, “Of course I remember.” At Columbia, not a single person has been able to say he or she remembers Obama.”   (link)

Obama meets CIA Brzezinski, who is exiting the term of Jimmy Carter, and is frequenting Afghanistan.   Brzezinski is a mentor to Obama.  John Brennan is in Afghanistan too.    The support of the Mujahadeen against Russia is job #1.

Obama takes a trip to Pakistan/Afghanistan with Pakistani friends who happen to be from government families, and are also not aligned with sympathies to Russia, and supportive ideologically, of the Mujahadeen.  Go figure?

And, um, well, additionally…. how did young ‘impoverished’ Barack afford such global travel?  Those ain’t exactly cheap airline tickets, no?  Or was someone else covering the costs and subsequent expenses?

Is this where Brzezinski, Brennan and Obama’s paths cross?   Using the connections of Obama who is travelling with Wahid Hamid and staying in Karachi with Mohammed Hasan Chandoo’s family, and visiting Hyderabad as well.

We know Obama also made friends with Chairman of Senate, Muhammadmian Soomro, who said that in Pakistan he [Obama] came to know about Sunni and Shia sects.   According to the report of Larry Rohter of April 10, 2008, in The New York Times, the Obama campaign staff, when questioned about the revelation of Obama’s 1981 trip to Karachi, stated:

“Mr. Obama visited Pakistan in 1981, on the way back from Indonesia, where his mother and half-sister, Maya Soetoro-Ng, were living. He spent ‘about three weeks’ there, Mr. Obama’s press secretary, Bill Burton, said, staying in Karachi with the family of a college friend, Mohammed Hasan Chandoo, but also traveling to Hyderabad, in India.”

We know the three week story was BS.   We know because it was perhaps the most important revelation never discussed by the media:

Where was Obama from the time he left Occidental to travel to Pakistan via Indonesia, to the time he entered Columbia – Which is Documented and Verified to be September 1982?   Where was he?  By his own admission this is the year he traveled to Pakistan.  The historical claim is he attended Columbia University after Occidental, but amid the discovery evidence in the Dr. Orly Taitz  v. Obama lawsuit we find Exhibit #3  Columbia official records show him attending Columbia university only for nine months September 1982-till May 1983.   One complete School Fall/Winter – Winter/Spring year.  (Exhibit #3 – Click to Enlarge)

The following paragraphs have been extracted from Taitz’ First Amended Complaint, filed at the U. S. District Court for the District of Columbia:

27. Further records from the Student Clearing House show even more shocking evidence. In his memoirs and multiple speeches Obama wrote that he studied for two years at Columbia University September 1981-May 1983. He admitted that in summer of 1981 he traveled to Pakistan to visit his friends, but repeatedly claimed that from September 1981 until May of 1983 he resided in New York and studied at Columbia University.

Taitz ran a check of his years of attendance at Columbia university and found out that Columbia official records show him attending Columbia university only for nine months September 1982-till May 1983 (Exhibit 3 — last line — click to enlarge), which means that the President of the United States lied to the whole nation about his whereabouts for a whole year September 1981 until September 1982. One year absence is the best case scenario, as he could get his university credit by reciprocity or through external studies.

28. As there is no record of Obama residing anywhere else in the United States from September 1981-September 1982, or attending any other university, by way of simple deduction it becomes clear that his visit to Pakistan lasted not a month or two, as he claims, but may have lasted for over a year. (continue reading)

Granted,  Dr. Taitz is somewhat of an odd personality, but the context of the Columbia University record is not a matter of her personality or agenda. Nor is it subject to opinion or spin.   It is a fact.  It is what it is.  This missing timeline directly contradicts Obama’s own words, and the construct of the narrative he and his fellow colleagues had created.

However, if you consider he never attended Columbia at that time, because he stayed in Pakistan, things make sense.  Not only do they make sense – they actually reconcile.

The “mystery Obama thesis” which just so happens to have turned up in Columbia – though no-one can remember him writing it, was about, wait for it,…..  ”an analysis of the evolution of the arms reduction negotiations between the Soviet Union and the United States“.   Oh boy, who would have been around to write such a specific thesis paper for cover?   It certainly is in the proverbial sweet spot for Brzezinski, no?

And then there’s the matter of how did Barack Obama gain entry into, and afford, Harvard Law School?  Mr. John O Brennan spent most of his C.I.A. career as an analyst, but during the 1990s served a tour as the chief of the station in Saudi Arabia.

[…]  In late March 2008, a former Manhattan Borough president Percy Sutton told a New York cable channel that a former business partner who was “raising money” for Obama had approached him in 1988 to help Obama get into Harvard Law School.

In this video interview, Sutton says he first heard of Obama about twenty years ago from Khalid Al-Mansour, who Sutton described as advisor to “one of the world’s richest men,” Saudi prince Alwaleed bin Talal.  Sutton knew Al-Mansour well, since the two men had been business partners and served on several corporate boards together.

As Sutton remembered, Al-Mansour was raising money for Obama’s education and seeking recommendations for him to attend Harvard Law School.

“I was introduced to (Obama) by a friend who was raising money for him,” Sutton told NY1 city hall reporter Dominic Carter. “The friend’s name is Dr. Khalid al-Mansour, from Texas.”

Apparently, al-Mansour serves on the Board of, among others, Saudi African Bank and was responsible for the Africa investment activities of Kingdom Holdings, Saudi Prince Al-Waleed bin Talal’s investment company.

Is this how it all finally ties together?  I mean what are the odds that both CIA operatives Brennan and Brezinski would be in Pakistan at the same time young Obama was there, and then both men end up on his advisory team in 2008, 26 years later  – at the same time the State Dept Passport records are breached by John Brennan’s company specifically regarding Obama?   The same guy who Obama just nominated to be CIA Director.

Seriously, give me odds?

Was the Columbia University angle just a CIA cover story, replete with faux documents, just to cover for Obama’s time in Pakistan as a liason between affiliated political interests, the circles of his friends parents, in support of the Mujahadeen/U.S. objectives?

The odd thing is, this outline explains every single disconnected theory, reconciles all the fragmented narratives, and actually solves all the disjointed narratives simultaneously.

Oh yeah, and let’s not forget this recent jewel:  Famous Jew Hater Brzezinski Defends Hagel As Candidate For Defense Secretary – Anyone Opposed to Hagel is Loyal To The Jews too.