I’m going to tell you right now this is the most dangerous time in American history since the Kennedy Assassination. There are some situations going on right now that you need to know about. The first thing that I want to say is this, right now you are seeing something happen where there are elements of our government that are at odds with each other and we are at a very dangerous crossroads. There are factions in the government that are trying to seize power and its going to get very ugly. I wouldn’t be surprised if there weren’t certain things going on now. The Boston marathon bombing was a false flag conducted by elements of our government who are seeking power either over each other or paticularly us to lock down our people in a police state. Make no mistake about it, that is the end game. I can see the big picture about whats happening here and the danger that we are all in. I’ve seen this from the begining. Right now with that black op, false flag being revealed the way it has been, people will take desperate actions to make sure that what they have done isn’t going to come back on them. So, we are all in alot of danger right now. I think its a little odd that we have had this situation with north Korea, the situation with the Boston marathon, the 2nd Ammendment they are trying to repeal that, they are going after the bill of rights so they have this false flag in Boston and then this Ricin showing up in Washington DC.  All of this is not by accident. These are planned events to try to get you willing to submit to government authority. They can’t protect you, only you can protect you. The cops ain’t going to be there when somebody is breaking through your door. CNBC is now saying that they are going to be quiet because they don’t want to disrupt the investigation, that’s how they are going to try to cover up this thing. They were going to bring this suspect out, they got caught in the black op operation, the false flag. Make no mistake about it, the authorities went to the media and said, We’ve got this guy, and then they backed off. Understand that the media, especially CNN and CNBC and some of those are CIA fronts. They control the media. The FCC which grants the licenses and all that is controlled by the CIA. They got caught and now they are going to say they are not going to look into it anymore because they might interfere with the investigation. The FEDS and the Police came out and said, We Have A Suspect, and then when this thing came out they tried to retract it because they knew that they got caught.

We are going to spread this info out everywhere. People will see it and if the American people don’t want to see it and this thing falls apart, American people, this is going to be your fault. It’s your fault if you are going to stay asleep and let these murderous criminals get away with this. The government is the terrorists, that’s whats going on here. They have proved that they can’t protect you unless they take all your rights away. 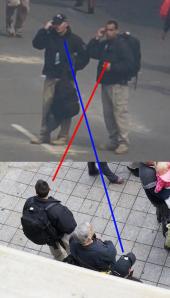