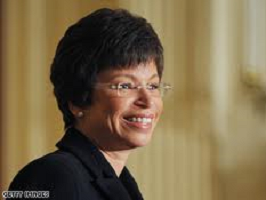 “People around our country are hungry for action,” she said. “And what you’ll hear from the president tonight is going to be all about action — creating opportunity — and it’s going to be a very optimistic speech.”

According to Jarrett, Obama will “set forth very specific, concrete proposals that he thinks will move our country forward — create opportunity for hard-working Americans who want to succeed.”

Although Obama will prod Congress to act on his agenda, Jarrett said Obama “will make clear tonight that he will take action on his own,” bypassing Congress when he sees fit.

“We’re going to do what we can, within the president’s own executive power, and working throughout the country with those who want to move our country forward,” she added. “And it is a lot of potential there. And I think the optimism that the president has comes from the grit and determination of the American people, our businesses, many of who (sic) are bringing jobs back to America, so we have some momentum going, and we just need to call on everybody to work together, and that’s what the president will do this evening.”

Jarrett, who is seen by many as the real power behind Obama, said the president “has never paid a lot of attention to the poll numbers” when asked about a recent Washington Post/ABC News poll showing Americans are losing confidence in him.

One area where Obama will act unilaterally is the minimum wage.

The Associated Press said Tuesday that Obama will sign an executive order setting the minimum wage for workers under new federal contracts at $10.10 an hour.

Obama, the AP added, has been under pressure from liberal Democrats to take unilateral action on the minimum wage.

“[Obama’s] got to understand that you don’t come and dictate an agenda. You offer compromise…And you can’t say, ‘Oh, it’s tough, so I’m going to go off by myself,'” he said.

But it seems that’s exactly what the president intends to do.

CNN says it will begin live coverage of Tuesday’s speech at 7 p.m. Tuesday Eastern time. We will live-blog the speech at our Facebook page, here.

Suggested by the author