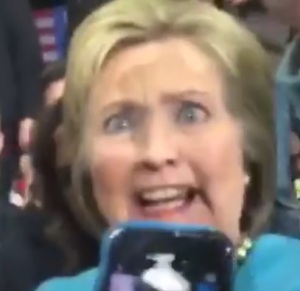 The Clinton campaign (Washington Post) released audio on Friday of Donald Trump talking about hitting on a hot woman in 2005.

Hillary Clinton tweeted out that she was “shocked!” in response to the audio!

This is horrific. We cannot allow this man to become president. https://t.co/RwhW7yeFI2

Really, Hillary?
This is the same woman who threatened to destroy Bill Clinton’s accusers in 1998.

Hillary Clinton has a long history of violence and abusing and men, women and security officers.

Here are a few of her more memorable lines:

“You sold out, you mother f**ker! You sold out!”
From the book “Inside” by Joseph Califano, p. 213 – Hillary yelling at Democrat lawyer.

“Son of a b*tch!”
(From the book “American Evita” by Christopher Anderson, p. 259 – Hillary’s opinion of President George W. Bush when she found out he secretly visited Iraq on Thanksgiving just days before her highly publicized trip.)

F**k off! It’s enough that I have to see you shit-kickers every day, I’m not going to talk to you too!! Just do your G*damn job and keep your mouth shut.”
(From the book “American Evita” by Christopher Anderson, p. 90 – Hillary to her State Trooper bodyguards after one of them greeted her with “Good morning.”

“If you want to remain on this detail, get your f**king ass over here and grab those bags!”
(From the book “The First Partner” p. 259 – Hillary to a Secret Service Agent who was reluctant to carry her luggage because he wanted to keep his hands free in case of an incident.)

“Where’s the miserable c*ck sucker?”
(From the book “The Truth About Hillary” by Edward Klein, p. 5 – Hillary shouting at a Secret Service officer)

“Put this on the ground! I left my sunglasses in the limo. I need those sunglasses. We need to go back!”
(From the book “Dereliction of Duty” p. 71-72 – Hillary to Marine One helicopter pilot to turn back while en route to Air Force One.)

“Come on Bill, put your dick up! You can’t f**k her here!!”
(From the book “Inside The White House” by Ronald Kessler, p. 243 – Hillary to Gov. Clinton when she spots him talking with an attractive female at an Arkansas political rally)

“The only way to make a difference is to acquire power”
(From the book “I’ve Always Been A Yankee Fan” by Thomas D. Kuiper, p 68 – Hillary to a friend before starting law school.)