Facebook’s explanation for the InfoWars ban claims that the site posts material which “glorifies violence,” and also uses “dehumanizing language.” 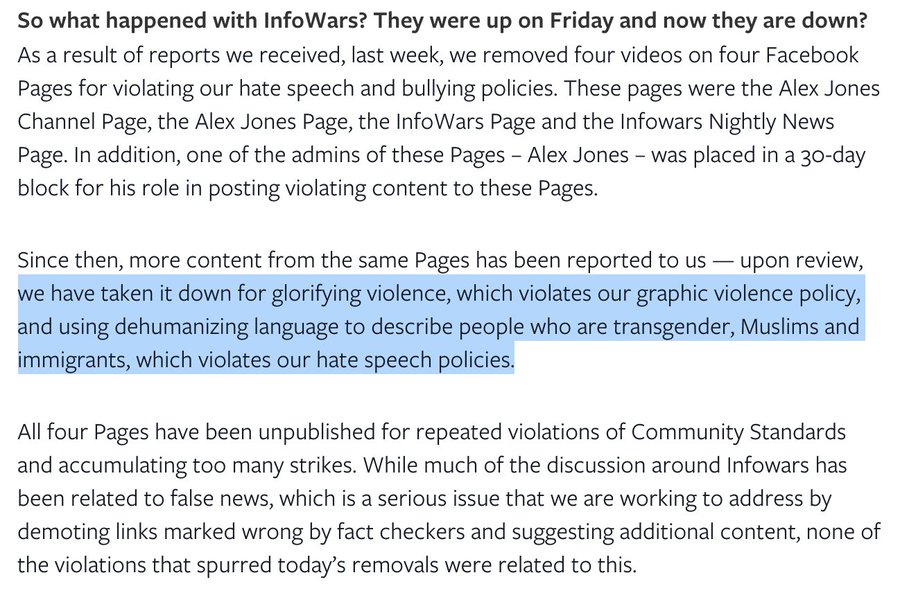 But the social media Masters of the Universe have made no attempt to explain why InfoWars should be banned while leftist pages with a far more explicit glorification of violence, not to mention using “dehumanizing” language towards Jews, Christians, and Americans in general, should remain and even prosper on the platform.

Among them, a page called “Kill Trump,” and dozens of global pages for the registereddomestic terrorist group Antifa, which have made unchallenged posts supporting violence.

“It’s Going Down” is one such prominent Antifa page. Beyond featuring violent imagery of President Donald Trump being attacked, it includes training and information on attacking critical infrastructure targets. “It’s Going Down” seems to be lower on Facebook’s list of “glorying violence” than InfoWars.

Infowars was banned from Facebook but this Antifa organizing site that offers recruiting materials that depict Trump supporters being bayoneted, and provided instructions on how to sabotage critical transportation and communication infrastructure, is still active. Weird, right?

Infamous anti-Semite and Nation of Islam leader Louis Farrakhan also remains on the platform, with nearly one million likes, while The Young Turks, a progressive news outlet, remains despite its founder Cenk Uygur’s denial of the Armenian Holocaust.

The New Black Panther Party, a black supremacist organization, which according to the Southern Poverty Law Center (SPLC) has “encouraged violence against whites, Jews, and law enforcement officers,” also has several pages on the social network.

Other pages allowed on the platform include: “Fuck White America,” “Fuck the south,” and “Islam Will Rule the World.”

It does not even require fresh transparency of Facebook’s murky rules around “hate speech,” “glorifying violence,” and “dehumanizing language,” to recognize that if InfoWars does not belong on Facebook, neither do these pages. By Facebook’s own treatment of InfoWars, one could make a reasonable argument that New York Times anti-white bigot Sarah Jeong, who refers to white people as “goblins,” is a perfect example of leftists using “dehumanizing language.”